IP Journal of Surgery and Allied Sciences (JSAS) open access, peer-reviewed quarterly journal publishing since 2019 and is published under the Khyati Education and Research Foundation (KERF), is registered as a non-profit society (under the society registration act, 1860), Government of India with the vision of various accredited vocational courses in healthcare, education, paramedical, yoga, publication, teaching and research activity, with the aim of faster and better dissemination more...

Banerjee: Importance of proper diet after thyroidectomy in diabetic patients: A short communication

Importance of proper diet after thyroidectomy in diabetic patients: A short communication

Thyroidectomy is a surgical technique used to treat cancer, noncancerous thyroid enlargement, goiter, and hyperthyroidism. It is a procedure to remove all or sections of the thyroid gland. Most importantly, some common complications are often observed, like weight gain, loss of libido, and vocal cord paresis or paralysis after thyroidectomy. After surgery, diabetic patients are more prone to comorbidities such as kidney disease, eyes health issues, hypertension, obesity, etc. This study highlighted the probable diet and essential home-based nutrition for post thyroidectomy complications. Weight gain is the common complaint of most patients who underwent surgery. Currently, there are insufficient data that do not provide clear conclusions about post-surgery diet plan. However, low carbohydrate, low fat but high veg-protein-rich diet are altogether helpful for weight loss, diabetes, and related complication. More research is needed in the medical nutrition therapies segment to get more dietary options for such patients.

There are growing cases with thyroidectomy, a surgical procedure to remove whole or partial thyroid gland often observed in postmenopausal women. There is also a matter to think about post-surgery proper nutrition to get all nutrients in a balanced diet. In addition, diabetes is a significant concern when the same patient is also undergoing to do thyroidectomy.

Mullur et al. (2014) explained that patients with hyperthyroidism often gain weight after thyroid surgery. Low levels of free T4 and T3 are thought to cause weight gain, counteracting the weight-loss effects of higher thyroid hormones. Rotondi et al. (2014) discussed that patients usually become obese after thyroid surgery, even when they have euthyroidism measuring the biochemical parameters. Most of the studies show such issues with mixed results, and some of the papers also have selection bias either at intervention or sampling grounds.1

The highest observation on weight gain was seen in menopausal women patients who did their thyroidectomy. Such postmenopausal patients reported more weight than premenopausal women. While there is no other alternative except the removal of the thyroid gland due to thyroid cancer, Graves’ disease, or a multinodular goiter that causes pressure symptoms, then in these cases, replacement therapy may restore normal levels of TSH, T4, and T3.2 Thyroid damage can also occur due to other factors. Antibodies directed against thyroid tissue antigens and antibodies that react with the thyrotropin receptor by binding to the receptor characterize the aberrant immune response. Some of these antibodies stimulate the thyroid gland by acting as agonists. It is thought that this condition is caused by an anomaly in the management of autoimmune responses, which leads to the development of large amounts of autoantibodies, which may stimulate the thyroid or, in the worst-case scenario, cause thyroid damage and cell death.3, 4, 5 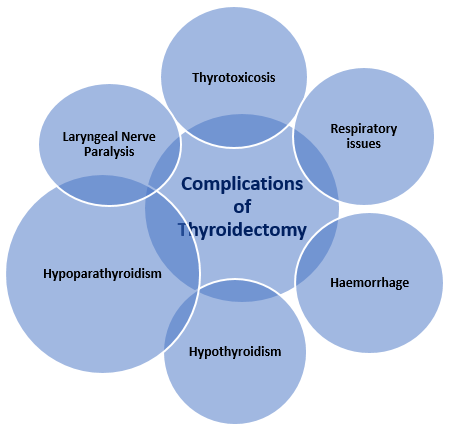 In their research study, Chung et al. (2019) showed that diabetes patients exhibited considerably more significant rates of concomitant chronic pulmonary illness, hypertension, obesity, and anemia at the start of the study. Patients with DM were more likely than non-DM patients to have vocal cord paresis or paralysis after thyroid surgery (2% vs. 1.3%; P value=.001).6 Katamadze and Marshania (2017) presented a case report in which a diabetic 56-year-old patient underwent thyroidectomy due to papillary microcarcinoma. The patient complained of erectile dysfunction after many days of thyroidectomy. Early detection of ED is critical for successful therapy, particularly in men with ED and several significant endocrine problems. In this example, the patient had a thyroidectomy and soon after the visited clinic.7

The best nutrition shall be eating soft meals such as pudding, gelatin, mashed potatoes, apple sauce, or yogurt in more or less quantity subject to patients. Constipation can be solved by eating high-fiber foods and drinking plenty of fluids. Some web content found in google that the keto diet may be helpful; however, a simple low carbohydrate, low fat, and protein-rich diet would manage the excess weight in case of weight gain at post thyroidectomy.8, 9

Similar to the ‘Western-pattern,’ the ‘animal food pattern' includes red meats and eggs. Intake of both processed and unprocessed red meat has been linked to an increased risk of obesity. Other features of the 'Western' pattern, fried and fast foods, are not found in this ‘animal food pattern'. Furthermore, several items that load firmly on the ‘Prudent’ practice, such as fish, are also part of the animal food pattern and have been linked to lower weight gain compared to meat intake.10 Other research, on the other hand, has discovered primarily animal-food trends. However, such diets may be helpful for a specific type of people but not suitable for all after thyroidectomy. The dietary patterns found in this study were dissimilar from those observed in other nations, with a clear separation between vegan and non-veg diet types emerging, with the exhibiting favorable connections with obesity and central obesity. If more research in India confirms these findings, India’s dietary guidelines may propose restricting animal-food intake in favor of a primarily plant-based diet.11, 12 Proper understanding and subsequent follow-up of low glycemic-indexed and Aggregate Nutrient Density Index (ANDI) listed food are the best ways to make a dietary model for such patients. In general, awareness of diabetic food and lifestyle modifications are the primary aims and objectives of dietitians and public health workers to make people aware of these include thyroidectomy persons.13, 14

There are no specific diet patterns or plans for thyroidectomy patients with or without diabetes (DM-II). The best way is to practice a low-calorie diet that contains low carbohydrates, mainly simple sugar and low fat but with enough veg protein. In this issue, more researches are needed.

© This is an open access article distributed under the terms of the Creative Commons Attribution-NonCommercial-ShareAlike 4.0 International License which permits unrestricted use, distribution, and reproduction in any medium, provided the original author and source are credited.