IP Journal of Surgery and Allied Sciences (JSAS) open access, peer-reviewed quarterly journal publishing since 2019 and is published under the Khyati Education and Research Foundation (KERF), is registered as a non-profit society (under the society registration act, 1860), Government of India with the vision of various accredited vocational courses in healthcare, education, paramedical, yoga, publication, teaching and research activity, with the aim of faster and better dissemination more...

Introduction: Facial aesthetic surgery requires a thorough preoperative analysis of face and identification of problems to frame a comprehensive surgical plan. The conceptions of an attractive face must be analyzed beforehand. Powell and Humphrey had defined facial angles and had formulated range which would be perceived as attractive.

Objective: To compare the change in pre- and post-operative nasolabial, nasofrontal and nasofacial angles in patients undergoing Rhinoplasty.

Materials and Methods: A prospective observational study was conducted from October 2014 to October 2019 in ENT department of a tertiary care hospital. Twenty-one patients undergoing Rhinoplasty and fulfilling the inclusion criteria were considered as study population. Their pre- and post-operative profile photographs were taken for morphometric analysis. The nasolabial, nasofrontal and nasofacial angles were measured and compared, before and one month after the surgery in profile pictures.

Conclusions: Rhinoplasty results in significant change in nasofacial and nasolabial angles and in expert hands, is expected to restore the various facial angles to their acceptable range.

The nose is the most prominent structure in facial profile and plays an important role in perception of beauty. Deviated nose can result in aesthetic, functional as well as psychological problems, leading the individuals to seek treatment. Rhinoplasty is one of the most frequently performed aesthetic surgical procedures in the world which can achieve a more balanced facial appearance and also improve nasal airway when combined with Septoplasty. At the same time, it is also one of the most challenging surgical procedures and may lead to patient dissatisfaction. It has been described as an easy surgery to do badly and a difficult surgery to do perfectly.1

Facial morphometry has been used to analyze the face objectively. The face has been divided into various proportions, and the various angles that the nose makes with the rest of the face have been studied for identification of the ideal angles that are perceived as most beautiful by the population.2 For a successful Rhinoplasty, a comprehensive preoperative analysis of nasofacial proportions is of utmost importance to help the operating surgeon to establish definite surgical goals and adopt the optimum surgical technique. Making of a surgical plan that would yield harmonious Rhinoplasty results for patients necessitates a detailed analysis of the patients’ angular and proportional profiles prior to surgery. Attractive faces are deemed to have ideal measurements and angles which have been described by Powell and Humphrey. They described ideal angles of the facial aesthetic triangle and gave the accepted dimensions of the facial angles: Nasolabial angle: 90 to 95° in males and 95 to 105° in females, Nasofacial angle: 30 to 40° degrees and Nasofrontal angle: 115 to 135°.3 These facial proportions act as a guide and are helpful in planning a procedure, though they cannot be taken as absolute values.

Studies have been done to evaluate the normal values of various facial angles and proportions using cephalometry, anthropometry, and photogrammetry. An accurate documentation of pre-operative appearance of patient is required for medico-legal documentation, to aid in explanation of surgical procedure to patient and obtain informed consent for same, planning of surgical technique and digital image manipulation to forecast expected surgical outcome.4 There is a lack of literature on the changes in facial angles in relation to nose following rhinoplasty. This study was conducted with aim to compare the pre- and post-operative nasofrontal, nasofacial and nasolabial angles using facial morphometric measurements and to observe if they fall in the ideal range as previously described in literature.

A prospective observational study was conducted from October 2014 to October 2019 in the Otorhinolaryngology department of an academic tertiary care hospital. A sample size comprising of 21 patients undergoing Rhinoplasty in the age group of 18 to 40 years of both genders consenting to participate in the study were included. Patients below 18 years or those who had any previous septal or nasal surgery, systemic diseases like tuberculosis, syphilis, sarcoidosis, wegner’s granulomatosis, immunodeficiency, or psychological disorders were not included in the study. All surgeries were performed under general anesthesia by a single surgeon with experience in performing Rhinoplasties.

All the patients had their photographs taken in various views as per standard protocol for Rhinoplasty.4 Post-operatively, the patients were photographed similarly one month after the surgery. The evaluation was made from profile photographs of the patients taken pre-operatively and one-month post-operatively. The angles studied were nasofacial, nasofrontal and nasolabial angles (Figure 1). Nasofacial angle is formed by the intersection of two lines, one drawn from nasion to pronasalae and another drawn from glabella to pogonion.5 Nasolabial angle is the angle formed between the plane of columella and upper lip as seen on profile view.6 The nasofrontal angle is the angle between the plane of nasal dorsum and a plane joining the nasion to glabella.2 Morphometric analysis of the images was performed using software (GNU Image Manipulation Program version 2.10.20). The data was tabulated and stored in a Microsoft Excel sheet. Statistical analysis was done using IBM SPSS version 20. Wilcoxon signed-rank test was used to compare the pre- and post-operative angles as measured on the photographs. 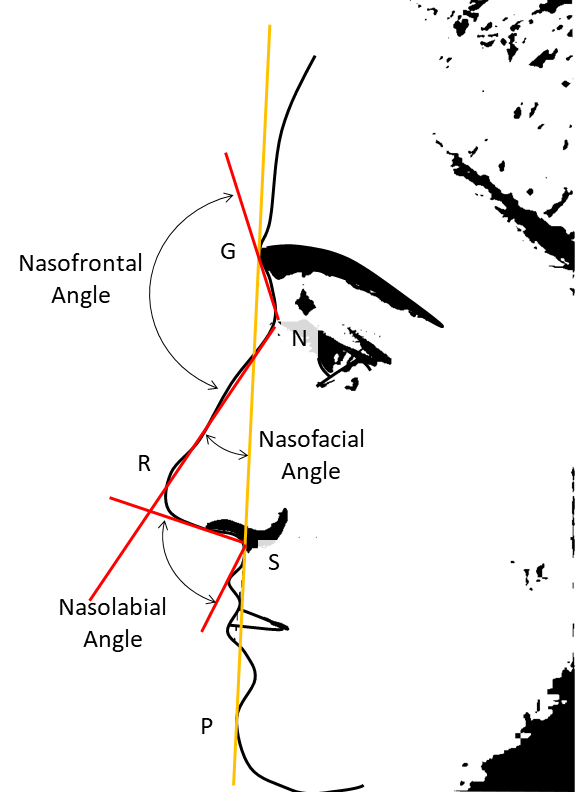 A prospective observational study was conducted in the Otorhinolaryngology department of a tertiary care hospital from October 2014 to October 2019. A total of 21 patients meeting the inclusion criteria and having undergone surgery was included in the study. The mean age of study participants was 28.4±6.1 years. The gender distribution was M:F = 13:8. No patients were lost to follow-up. 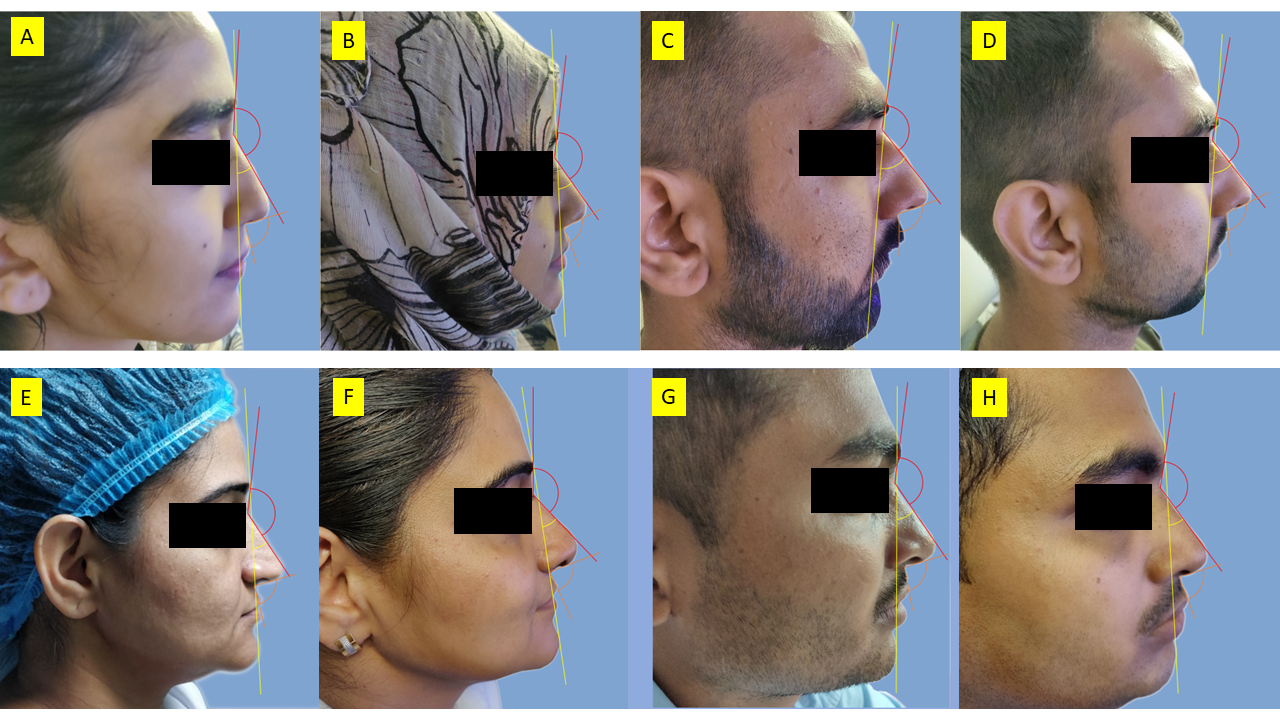 The perceived improvement in facial profile post Rhinoplasty can be assessed by measurement of various cephalometric angles. The angles studied most commonly include the nasolabial, nasofacial and nasofrontal angles. Out of these, the nasofrontal angle is said to be of the least importance in terms of subjective assessment for aesthetic improvement.7

Pasinato R et al studied the changes in various angles measured on nose following Rhinoplasty. They found a significant increase in nasolabial and nasofrontal angles, and a reduction in the nasofacial angle following rhinoplasty.8 In our study, we find an increase in all the three angles measured on face with relation to the nose. This seems to be due to the pre-op facial morphometry of patients and the patients in our study requiring mostly reduction rhinoplasty that is expected to have an increase in the nasolabial and nasofrontal angles post operatively.

Shahbazi Z et al studied the changes in nasolabial angles in patients undergoing Rhinoplasty. They observed that the mean nasolabial angle in men was 92.4° and in women was 97.12°, which increased post-operatively to 111.28° in men and 111.81° in women.9 The results of our study are similar to theirs as our data shows a mean increase of 5.2±9.3° following rhinoplasty.

Siddapur KR et al. studied the angulations of nose using photographic techniques in a sample of medical students representing the south Indian population. They found a mean nasofrontal angle of 131.9±8.1° (Males 126.2±8.8° and females 135.1±5.5°).10 In our study, none of the patients have a nasofacial angle beyond mean±2SD as determined by Siddapur KR et al.

The strengths of this study lie in the objective assessment of facial angles in relation to the nose and studying their changes post rhinoplasty. There are some weaknesses in the current study, including lack of subjective assessment and patient perception of the changes in facial appearance following the rhinoplasty. Addition of same would have helped in understanding patient perceptions of facial features and their correlation to the changes in nasal angles.

From the results of our study, it can be concluded that a significant change is observed in nasofacial and nasolabial angles following Rhinoplasty. The change in nasofrontal angle was not found to be significant in our study. In expert hands, Rhinoplasty is expected to restore the various facial angles to their acceptable range in a majority of the patients.

The authors declare no conflict of interest.

I Gräber S Jovanovic A Berghaus Subjective and objective evaluation of the outcome of rhinoplasty. A retrospective studyLaryngorhinootologie1995748495910.1055/s-2007-997787

© This is an open access article distributed under the terms of the Creative Commons Attribution-NonCommercial-ShareAlike 4.0 International License which permits unrestricted use, distribution, and reproduction in any medium, provided the original author and source are credited.